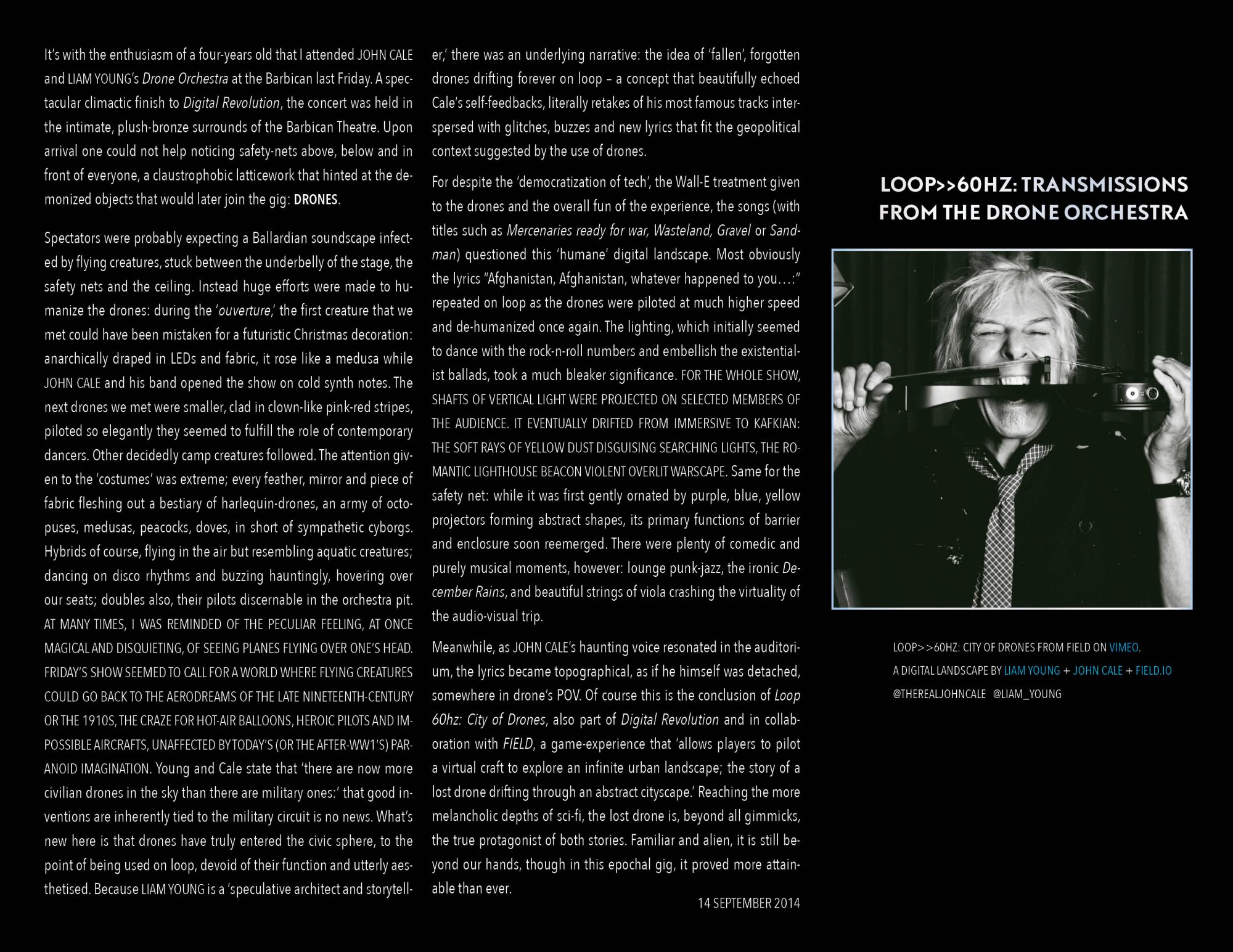 It’s with the enthusiasm of a four-years old that I attended John Cale and Liam Young’s Drone Orchestra at the Barbican last Friday. A spectacular climactic finish to Digital Revolution, the concert was held in the intimate, plush-bronze surrounds of the Barbican Theatre. Upon arrival one could not help noticing safety-nets above, below and in front of everyone, a claustrophobic latticework that hinted at the demonized objects that would later join the gig: drones.

Spectators were probably expecting a Ballardian soundscape infected by flying creatures, stuck between the underbelly of the stage, the safety nets and the ceiling. Instead huge efforts were made to humanize the drones: during the ‘ouverture,’ the first creature that we met could have been mistaken for a futuristic Christmas decoration: anarchically draped in LEDs and fabric, it rose like a medusa while John Cale and his band opened the show on cold synth notes. The next drones we met were smaller, clad in clown-like pink-red stripes, piloted so elegantly they seemed to fulfill the role of contemporary dancers. Other decidedly camp creatures followed. The attention given to the ‘costumes’ was extreme; every feather, mirror and piece of fabric fleshing out a bestiary of harlequin-drones, an army of octopuses, medusas, peacocks, doves, in short of sympathetic cyborgs. Hybrids of course, flying in the air but resembling aquatic creatures; dancing on disco rhythms and buzzing hauntingly, hovering over our seats; doubles also, their pilots discernable in the orchestra pit. At many times, I was reminded of the peculiar feeling, at once magical and disquieting, of seeing planes flying over one’s head. Friday’s show seemed to call for a world where flying creatures could go back to the aerodreams of the late nineteenth-century or the 1910s, the craze for hot-air balloons, heroic pilots and impossible aircrafts, unaffected by today’s (or the after-WWI’s) paranoid imagination. Young and Cale state that «there are now more civilian drones in the sky than there are military ones»: that good inventions are inherently tied to the military circuit is no news. What is new here is that drones have truly entered the civic sphere, to the point of being used on loop, devoid of their function and utterly aesthetised. Because Liam Young is a «speculative architect and storyteller», there was an underlying narrative: the idea of «fallen», forgotten drones drifting forever on loop – a concept that beautifully echoed Cale’s self-feedbacks, literally retakes of his most famous tracks interspersed with glitches, buzzes and new lyrics that fit the geopolitical context suggested by the use of drones.

For despite the «democratization of tech», the Wall-E treatment given to the drones and the overall fun of the experience, the songs (with titles as ominous as Mercenaries ready for war, Wasteland, Gravel or Sandman) questioned this «humane» digital landscape. Most obviously the lyrics «Afghanistan, Afghanistan, whatever happened to you…»: repeated on loop as the drones were piloted at much higher speed and de-humanized once again. The lighting, which initially seemed to dance with the rock-n’-roll numbers and embellish the existentialist ballads, took a much bleaker significance. For the whole show, shafts of vertical light were projected onto selected members of the audience. It eventually drifted from immersive to Kafkian: the soft rays of yellow dust disguising searching lights, the romantic lighthouse beacon violent overlit warscape. Same for the safety net: while at first gently ornated by purple, blue, yellow projectors forming abstract shapes, its primary functions of barrier and enclosure soon reemerged. There were plenty of comedic and purely musical moments, however: lounge punk-jazz, the ironic December Rains, and beautiful strings of viola crashing the virtuality of the audio-visual trip.

Meanwhile, as John Cale’s haunting voice resonated in the auditorium, the lyrics became topographical, as though he himself was detached, somewhere in drone’s POV. Of course this is the conclusion of Loop 60hz: City of Drones, also part of Digital Revolution and in collaboration with FIELD, a game-experience that «allows players to pilot a virtual craft to explore an infinite urban landscape; the story of a lost drone drifting through an abstract cityscape.» Reaching the more melancholy depths of sci-fi, the lost drone is, beyond all gimmicks, the true protagonist of both stories. Familiar and alien, it is still beyond our hands, though in this epochal gig, it proved more attainable than ever.